Gray, then red, orange, and white 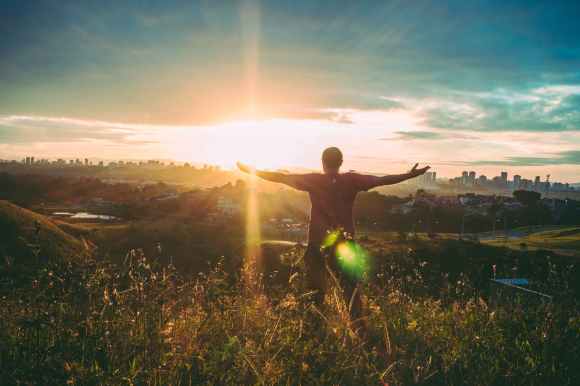 My heart is steadfast, O God;
I will sing, I will sing praises, even with my soul. Awake, harp and lyre;
I will awaken the dawn! I will give thanks to You, O Lord, among the peoples; and I will sing praises to You among the nations. For Your lovingkindness is great above the heavens, and Your truth reaches to the skies. Be exalted, O God, above the heavens, and Your glory above all the earth.

Have you ever noticed how music can change an atmosphere? A beautiful love song can add romance to an ordinary meal. A soft instrumental tune can lull a fussy baby to sleep and a lively beat can make working out more enjoyable. Music has inspired choreographers to produce captivating ballets and painters to turn a blank canvas into a colorful masterpiece.

The songs we sing can be just as profound as a musical tune we hear. Singing songs about love can create feelings euphoria. Singing happy songs lifts our spirits, and singing songs with certain rhythms make us want to dance, smile, or simply sit and meditate. Did you know that songs can take us to a place of refuge? When we sing, we release one of the most powerful weapons in our arsenal–praise!

I am reminded of King Saul who had a troubled spirit. Saul’s sin resulted in God allowing him to be tormented by an evil spirit. David was summoned to the king to play the harp for him. When David played, the spirit left Saul (1 Samuel 16:14 – 23).

Another incident in the bible when singing changed the atmosphere was when Paul and Silas were thrown into prison. Their singing and praises triggered an earthquake that caused the prison doors to open (Acts 16:16 – 40) and stirred the hearts of the prison guards.

My favorite scriptural account of music changing things is Israel’s victorious march on Jericho (Joshua 5 & 6). God instructed Joshua to organize the warriors to go ahead of seven priests armed with seven trumpets followed by the Ark of the Covenant. They marched around this wall for six days and on the seventh day, they blasted the trumpets and the wall that kept them from their promise came down. Their obedience to God’s instructions and their praise resulted in victory.

I am convinced that our life songs and obedience to God’s word are the keys to our victories as well. We are instructed not to worry about anything (Philippians 4:6 – 7), but to pray about everything and give thanks in all situations (1 Thessalonians 5:18). David’s way of praying and giving thanks gained him a reputation of a man after God’s heart. From an early age David sang songs, wrote poetry, and danced for joy. We have an entire collection of his songs in the book of Psalms.

David poured out his heart to the Lord through his music. He wrote about his struggles, his emotional distresses, and his love for the Lord. What I love most about the Psalms of David is no matter how dark his mood or how angry he was, he acknowledged God’s power to make things right.

We can exercise the same level of faith that David had and experience a joyful and victorious life if we follow his example. Let’s sing to the Lord a new song. Instead of constantly complaining about what is wrong or being miserable about what we don’t have, let’s praise the Lord instead.

It’s not always easy to sing when trouble comes, but even during difficult times , instead of allowing depression and dread to cast a shadow over us, let’s sing a song declaring the goodness of the Lord. Let’s lift up songs of praise and thanksgiving. Because that is when we will find a peace that surpasses all understanding.

Raise your hands, clap your hands, or use your hands to write a love song to the Lord. Your act of worship will please the Lord and change the atmosphere around you. 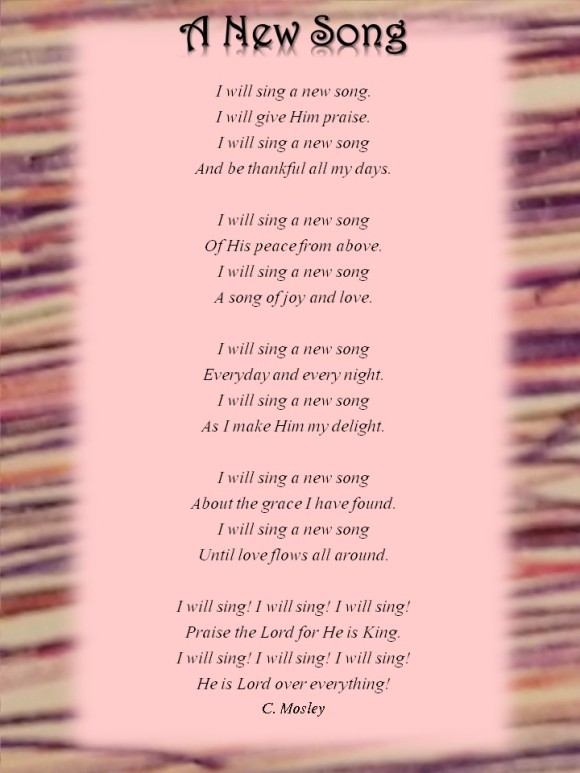 Confessions of a Teen in Quarantine

Well, 2020 is well under wayNew things happened just like they saidBut now as I lie here in my bed I’m wondering if they knewWe’d experience this fear and dreadNot business as usual but isolation instead. I wonder if they knowAll the one-sided reports we’re being fed Creates panic in our head. Even I as […]

It’s hereA new yearAdults keep talking aboutThings will be clear. Yet, I fearMy generation won’t matureUnless things change quicklyAnd cause division to disappear. I’m ready to hearHow I can steerThrough the chaos and confusionOf the separation, accusations, diseases, and negative atmosphere I want it to be clearThe derision that I hearMakes it difficult for my […]

Confessions of a Teen in Love for the First Time

So this is what they talk about In the movies In the songs. I didn’t think I would experience this. Now you’ve come along. I’m learning something new. Not just about you, But about myself– How deep I can be. This is new to me. I like where I am right now. I feel more […]